Many years ago, Dad invited me to a workshop featuring two hymn writers: Ron Klusmeier and Fred Kaan. It was a beautiful night of creativity and worship! I brought Monika to a workshop, and together, we recorded a few of Ron and Fred's songs.


A few days ago, I received an email that Ron was doing a workshop in Toronto this weekend! 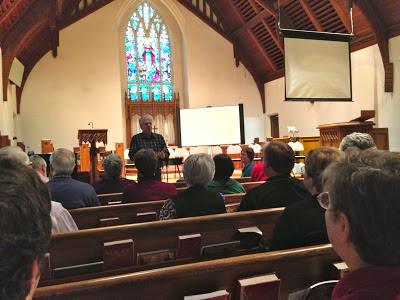 This afternoon, I joined 30 other singers for an afternoon with Ron Klusmeier and his team. They're on an epic one-year tour of Canada! They visit churches to lead workshops and concerts featuring the music of Ron and his cowriters.

Our group today was composed (pun intended) of choir singers and music directors, so you know the sound was great. We sang new songs, and learned about Ron's ministry of making songs available to churches of all shapes and sizes. 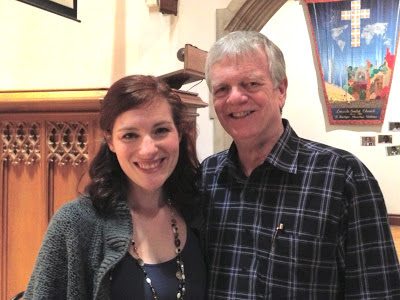 After the workshop, Ron and I had a chance to catch up. I'm so inspired by Ron. First, there's his incredibly large body of work - over 750 hymns, and more coming every year. He works with cowriters from around the world, and many of his partnerships are decades long. And second, I'm inspired by his desire to put his songs directly into the hands of church musicians. These workshops are so user-friendly, with songs the average choir can pick up on the first pass. And in addition to his songbooks, there's his incredible website that makes charts and arrangements available for any kind of musical configuration.

Today has left me feeling encouraged and inspired.... the perfect way to leave Saturday and go into Sunday...
Posted by Allison Lynn at 9:41 PM