We’re back at beautiful Elim Lodge, just north of Peterborough! This has become one of our favourite places to sing. Sweet people, the sun glistening on the lake, and always interesting speakers create a relaxing and invigorating getaway.

This weekend, we’re leading worship for the Elim Women’s Retreat. Almost 100 women of all ages and backgrounds have gathered for 3 days of worship, teaching, and fellowship.

We’ll be leading four worship sessions, and singing a concert of our own songs tomorrow afternoon. Our speaker is Tara Rye, a writer and teacher from Omaha, Nebraska. Her topic is The 7 Times Jesus Prayed and, judging by tonight, I think we’re in for a great journey.

I just have to say: I love leading worship for retreats! These ladies came ready to worship, and tonight was amazing! They sang with joy and passion. Love it, love it, love it!

Posted by Allison Lynn at 9:46 PM No comments:

A Day of Dedications....

Today had an unwritten theme - Dedication.

Last spring, Gerald and I wrote "A Divine Heart Imagined You." Inspired by Psalm 139, the song reminds us that God hand-crafted each of us in love. When the song was new, we sang it for our good friends, Deanna and Michael. Well, we didn't know it that night, but Deanna and Michael had a secret - God was already hand-crafting their little girl. After we sang, Deanna and Michael decided they wanted our song at their daughter's dedication.

Today was that day. We arrived bright and early at Calvary Church to rehearse the band and have soundcheck. Some of our Gathering band musicians attend Calvary, so we had them lined up to play, but suddenly a pianist, violinist, and additional vocalist also showed up. In the end, we had a full, 8-piece band! The sound was tight and fluid.


And the worship was powerful! This congregation came ready to praise.
The message, the prayers, the music, and the beautiful dedication of baby Darragh
all flowed to create a glorious morning.

Cool Side Story: I was at our CD table after the service, and a woman came up to me, grabbed my "Real Big Fan" CD and said, "I know you!" She bought "Real Big Fan" years ago, and was actually listening to it this morning before church, not knowing we would be at Calvary! When she arrived, she was shocked to see us leading worship. It just reminded me that even though we record the music, we never know who's listening or how it's affecting their lives. Something for all musicians to remember when we hit the studio...

After church, we attended a family luncheon to celebrate Darragh's dedication. Sitting by Lake Ontario, sipping iced tea, nibbling great food, and chatting with interesting folks was refreshment for the soul.

Other Cool Side Story: One of the guests was Herbie Kuhn, "The Voice of the Toronto Raptors"! If you know Gerald and his love for basketball, you know this was a highlight for him!

We slipped out of lunch early to head up to St. John's York Mills for our second dedication of the day - the ordination of our friend, Derwyn. Derwyn and his family came to Toronto to study at U. of T. but God had another plan. At St. John's, they've been involved in music, children's programs, technology, worship, and pretty much anything that needed a helping hand. I love ordination services - watching someone dedicate their life to God's ministry in such a public, formalized way is powerful and inspiring. (No, I don't want to get ordained! Let's not start any rumours...)

Gerald and I led the band, and it was a tremendous time. Derwyn had chosen great music, and our team really stepped up. The choir led a few songs by themselves, and then we all joined together on a few numbers for a huge, full sound.


The highlight was Gerald's new song, written for today - "All I'm Called To Be."
He played it in the staff meeting this week so Derwyn would hear it in advance,
I heard the song throughout the writing stages, and it turned out so beautiful.
Gerald gave a moving performance in the service, and I joined on harmony.
It just felt so special to share it with Derywn and his family tonight.

The response to the music was overwhelming, especially for Gerald's song. I think it gave people a glimpse of what the music at St. John's will be like when we're there for Sunday mornings.

On a day like today, I'm, of course, reminded of my own commitment to ministry.
But today, I was part of the congregation asked to support both Darragh and Derwyn
in their lives in Christ. So that got me thinking,

"What am I doing to support my congregation,
my musicians, my friends,
and my family in their faith walk?"

Food for thought on a richly blessed day....

Posted by Allison Lynn at 11:00 PM No comments:

All Saints Whitby has been on my radar for a while now. Just a few years ago, the entire sanctuary went up in flames, bringing pain and heartache to the entire church community. As they went through their process of rebuilding, I met several parishioners when I led worship for the Peterborough AWARE weekend. This year, thanks to Facebook, I connected with a friend from that weekend who connected Gerald and me with their new priest, and this morning, we visited All Saints to lead music for their Pentecost worship.

Pentecost is one of my favourite Sundays for music. Between the images of wind, flame, Holy Spirit, and speaking in tongues, the day is overflowing with powerful and creative musical choices. The music team at All Saints had today off, so we led the congregation in our signature blend of contemporary praise music and revamped classic hymns. A few months ago, Gerald wrote a new song called Light Me, which was perfect for today's message of letting the Holy Spirit ignite the fire of Jesus's love in you, and bringing that light into the dark places of this world. 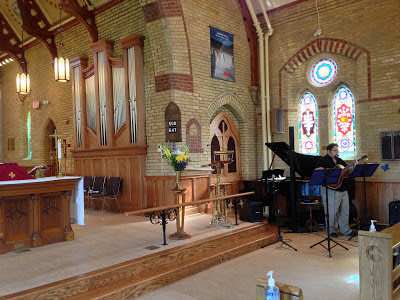 Gerald at soundcheck. Hard to believe this sanctuary was once destroyed by fire.

We were humbled by the response to the music. My favourite was the very-senior woman who told me that she's not a fan of contemporary music, but she "could feel God glorified in the music" and because of that, the music and worship were powerful for her. Mission accomplished.

After the service, we were blessed by the beautiful hospitality of a parishioner. A small gathering, beautiful food, and a glowing spring garden set us up for a relaxing afternoon.

It's strange not having the Gathering today, but having such a rich day is getting us through. Tonight, a barbecue with the family, and then, two glorious days off!

Posted by Allison Lynn at 4:00 PM No comments:

Now that we're in our new home and surrounded by everything we own in boxes and bags,
I finally had time to update my photos!

We've got some great photos of Ali Matthews Songwriting Workshop,
and all week we're adding photos for this Saturday's Musicfest concert.

You can see the Songwriting Workshop HERE and Musicfest HERE. 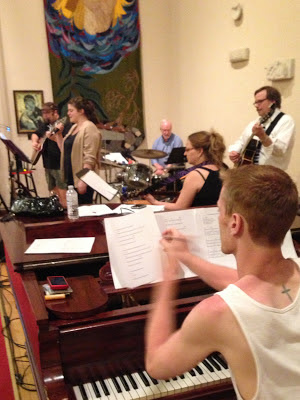 Band rehearsal for this week's Musicfest concert!
Posted by Allison Lynn at 12:24 PM No comments:

After weeks of packing, cleaning, and moving, we're finally in our new place. This new space is such a good fit for us. Can't wait to find out how we'll live and create in here. 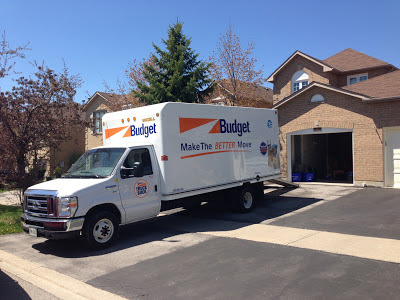 Is it totally ironic that, just this Wednesday, I saw the Wizard of Oz?

... we were driving home from leading worship at Harpeth Springs Community Church, just outside Nashville, when an 18-wheeler changed lanes without looking and hit, pushed, dragged, rolled, flipped, and threw us down the highway at 70 miles an hour. (May 3, 2009)

We've told the full story countless times at concerts and worship events, and it always sparks conversation. Some people are amazed that we walked out with so few physical injuries. Others share their stories of God's grace in frightening situations. And others choose to have a moment of thanksgiving, for what God did in our lives, and for what He's done in theirs.

So today, as I think back on May 3, 2009, I remember with gratitude our friends, our church family, our neighbours, and our parents, who cared for us, fed us, supported us, and prayed for us during both those early moments and 3 years of physical, emotional, and financial challenges the began that day. I'm thankful for the continuing lessons that have come from the accident - reminders of the fragility of life, the power of community, and the importance of treating others gently.

And I'm reminded today that Gerald and I, like each of us, is loved, valued, and covered by the grace and provision of God.


Today,
we're going to take a little time
to slow down,
enjoy the moment,
give thanks,
and have a little celebration.

I encourage you to join us in this...
Posted by Allison Lynn at 3:48 PM No comments:

I'll ask a bit of forgiveness in the slow blogging on this - it's Moving Week! Every day we're taking trips to our new home, packing the last of our stuff (which in reality is most of our stuff) and trying to fill out all the change-of-address forms. Crazy week, but really exciting too!

On Saturday, we joined the awesome Ali Matthews for her all day songwriting workshop. Gerald and Ali started weekly online meetings not long after GMA Week last November. I was so excited when they started - creatively they're such a good pairing. Writing, mentoring, and lots of story sharing led to an invitation to teach a few sessions at the workshop. 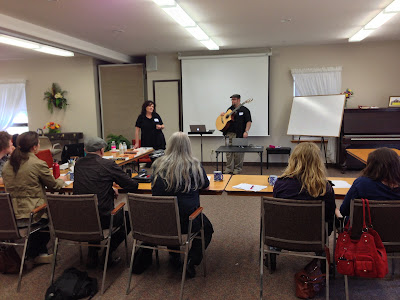 Ali opened the day with the basics of writing, a great listening exercise, and an invitation to be brave in our writing and creativity. Gerald finished the morning with a session on creating lyrical hooks. Over lunch, we learned more about each of the songwriters - What are you writing? What are you goals? What are you listening to these days?

Gerald opened the afternoon by showing how harmonic theory can create tension and release in your music. Ali ushered the writers in the challenge of the day - write! Try something new - find a new cowriter, try a new style, or just do something that scares you.

After an hour, we gathered to hear the results, and it was incredible. One team wrote a bouncy song for spring, a young writer created the start of a worship song, and some dug deep into their broken hearts to share their pain and hope in song.

There was such a great feeling of creativity and community in everything. Ali is so generous with her knowledge and wisdom, and it was an honour to be part of today.

Photos to come soon...
Posted by Allison Lynn at 7:44 PM No comments: