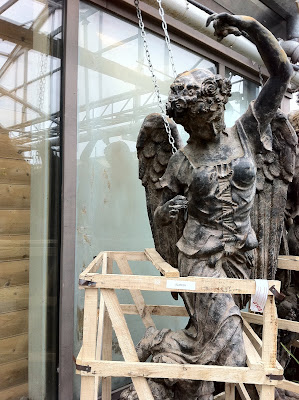 I found this angel in chains at a garden store this summer, and the image fascinated me. Her face and posture mix gracefulness and strength, yet she's been confined like a circus commodity with the chains, crate, and 'sold' sign.
It reminded me of the way we all try to contain things that we find too large or too powerful in our lives, even if these things are good and positive - love, change, passion, talents, relationships, even God...
I thought this was an appropriate angel for New Year's Eve:
What chains have bound you this year?
What powerful and positive forces are you trying to contain,
only to your own detriment?
I encourage you to spend some time in silence or prayer today, examining 2011, and seeking a freer 2012. 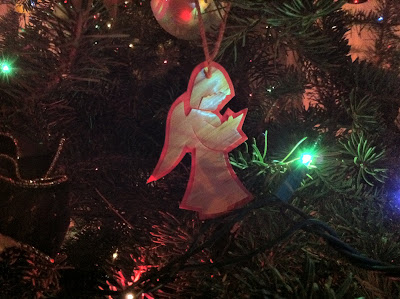 While crushing ribbons and wrapping paper into the recycling box one Christmas, my eyes caught a glimpse of a wing. This little angel - created only with a sliver of wood and a slip of paper - had been tied into the bow of a now-unwrapped present. I grabbed the little ornament, untied her from the bow, and found a waiting branch on my tree.

Christmas can get overwhelming with flashing lights, boisterous parties, and crowded shopping malls. This little angel reminds me to keep an eye out for the gentle, delicate details - the soft moments by the tree, the email from a long distance friend, the chance to smile at someone who needs a ray of light... 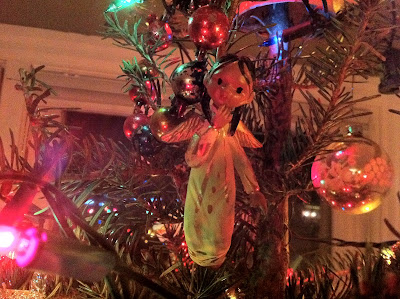 My angel collection began years ago. I remember reading an issue of Guideposts magazine that focused on angels, and I became fascinated with their place in art history. I loved how they could be beautifully represented by artists from any background with any material: paint, wood, needlepoint, clay, paper, feathers, reclaimed materials - the list is endless.

That issue profiled a woman who had been collecting angels for years and I thought, "What a good idea."

I haven't counted my collection in recent years, but I'm sure it's around the 100 mark. This Mexican angel was a gift from a friend. I love her sweet, thoughtful expression. Too often, we only think of angels as represented in European Medieval or Victorian art. This little one reminds us that angels appear in the art of many cultures, and are represented through their unique world view. 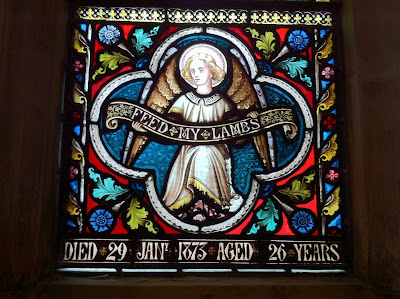 On this year's East Coast Tour, we had the chance to visit many beautiful churches. This tiny window was a detail found in the Anglican Cathedral in Montreal, Quebec. The larger part of the window showed Jesus healing the sick. "Feed my lambs" is a reference to Jesus's command in John 21. The dates at the bottom show that the window was given as a memorial. I love this angel for the vibrant colours, and for the reminder to care for those around us. 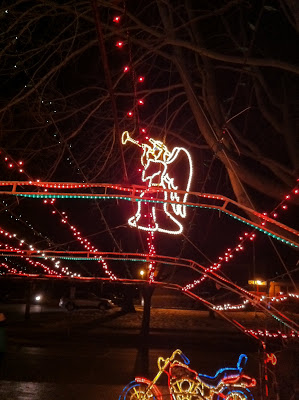 There's a house in Burlington that's covered, and I mean covered, in Christmas lights. It's the kind of house that becomes a destination on a Christmas drive.

The lawn, walls, roof, driveway and backyard are smothered in Santas, reindeer, snowmen, and every Christmas image you can imagine. There's a full nativity in the middle of it. The motorcycle in the image above commemorates the memory of a lost family member.

Above the lit arches that frame the driveway is a lone angel, reminding us that these thousands of lights would pale in comparison to the sight of the choir of angels seen by the shepherds that first Christmas night.

To celebrate the twelve days of Christmas,
my Dad is writing a blog series called
"The Twelve Creches of Christmas."

Inspired by this, I've decided to write my own version, called
"The 12 Angels of Christmas." 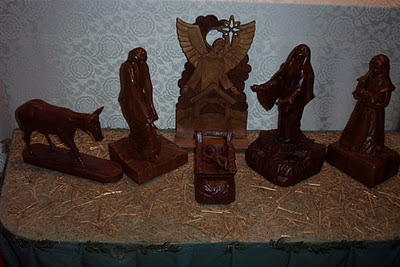 The nativity angel, dedicated in memory of Steve.
Today's angel is one I had made for the nativity
at St. John's York Mills Church.
Dad has also featured the nativity on his blog, so you can read the story here.
Posted by Allison Lynn at 7:36 PM 2 comments:

How silently, how silently
The wondrous gift is given!
So God imparts to human hearts
The blessings of His heaven.
No ear may hear His coming,
But in this world of sin,
Where meek souls will receive him still,
The dear Christ enters in.

May you feel the peace, love,
and deepest blessings of the season!
Posted by Allison Lynn at 7:30 PM No comments:

Two hours of morning carols at a seniors home....

Candlelight worship at Church of the Messiah...

There's no other way we'd rather spend Christmas.
Posted by Allison Lynn at 11:15 PM No comments:

The Twelve Creches of Christmas

To celebrate the twelve days of Christmas, my Dad,
Rev. Hollis Hiscock, is blogging about
The Twelve Creches of Christmas.

Starting Christmas Day, he'll feature a daily creche from a variety sources.
You can follow his blog here:
Moss From a Rolling Stone
Posted by Allison Lynn at 7:25 PM No comments:

Today, in our family, we remember those struggling this holiday season with
grief, depression, loneliness, addiction, or suicidal thoughts.

We encourage you to reach out to anyone in your family or your community who may be having a rough season.


If you need help,
we encourage you to reach out to someone -

a friend,
a teacher,
a family member,
a priest or pastor,
a health care worker,
a therapist,
a hot line, prayer line,
or 911.

We started the morning with Church of the Messiah's Christmas pageant. The church looked beautiful with all the decorations. Instead of a traditional type of pageant, adults performed monologues to tell the stories of different witnesses to the first Christmas - Herod, the innkeeper, Mary, etc. In between each monologue, we sang the Taize chorus "Wait for the Lord." The monologues really humanized the Christmas story, reminding us of the variety of reactions we can all have to the same event.

Tonight was the Christmas Carol Service at St. John's York Mills. We really worked hard to blend the traditional lessons and carols format with the range of creativity we have at St. John's. The music featured organ, choir, handbells, and our Gathering Worship Band. Pre-service, we played a jazzy version of "What Child is This," featuring saxophone. For a congregational song, we played the Caribbean-inspired hymn, "The Virgin Mary Had a Baby Boy" featuring lots of percussion and even a trombone.

We couldn't have Christmas Carol without singing "Silent Night," but we wanted to give it a little twist. Gerald played a classically-inspired version of the melody, while I told the tale of how Silent Night was composed for guitar. As the story ended, Gerald played a simple arpeggio, and I sang the first verse. On the second verse, the congregation joined in, and we added chimes, band, organ, and choir. Just beautiful!

Gerald had the idea of singing the classic "Little Drummer Boy/Peace on Earth." complete with the opening clip from the original Bing Crosby/David Bowie video. Our choir's bass lead sang Bing, and Gerald was Bowie. It was wonderful to look out and see the smiles during the video. 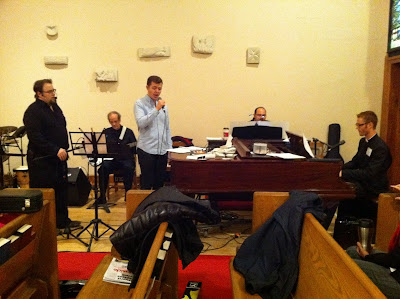 Gerald leading the band in our pre-service rehearsal.
We also sang Gerald's song "My Heart is the Manger." This is truly one of my favourite Gerald songs ever, and it was awesome to include it in the service. After the service, I was flooded with positive comments about the song. When we do our Christmas album, this song will be first on our list.

We've been singing Christmas music for over a month now. It's been good, but as of today, I am officially, 100% in the Christmas spirit!

Bring on the eggnog!
Posted by Allison Lynn at 11:47 PM No comments:

The store was feeling the crowded energy of Christmas shoppers.
I noticed two women in line ahead of me, getting agitated with the sales clerk. At first I thought they were together, and then I realized they weren't - their only connection was their mounting frustration with this lone salesperson.
One woman was waving her twenty dollar bill in the air and saying "It's just not worth the savings" with increasing vigour. The other was pacing back and forth, tapping her wallet on the counter and saying, "I'm still waaaaiting." over and over. Finally, the first woman just walked away, with a final "It's really not worth the savings." The other let the clerk check out her purchase, but only with voluminous sighs worthy of a community theatre melodrama.
It was finally my turn, so I smiled at the clerk as he dealt with my purchase. But he was so beaten down, so embarrassed, that he wouldn't meet my gaze.
This wasn't a bad person or a lazy worker -
just someone overwhelmed on a busy day
in a crowded store.
As he finished my transaction, I tried one more time. "I hope your day gets better." He finally looked up and caught my eye. I gave him my biggest, goofiest grin. "Hope your day gets better, " I sing-songed.
He laughed, I smiled, and that was when I decided...
This Christmas, I'm going to be the
perkiest,
happiest,
most joyful
customer you've ever seen.
I'm going to smile at everyone - and I mean everyone!
I'm going to let you cut ahead of me in line.
I'm going to ask you, "How's it going?" before you check out my purchase.
And if things get too crazy, I may just break out in a round of
"We Wish You a Merry Christmas" while you're crashing your shopping cart into mine.
Extreme times call for extreme measures. You may find my approach silly or annoying, but giant-sized Grinchiness must be met with freakishly fantastic festiveness!
My challenge to you: How are you battling the Grinch this year?
Posted by Allison Lynn at 10:17 PM No comments: 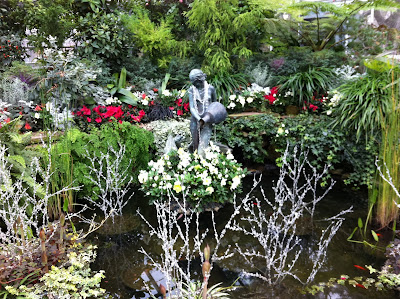 The pond at Allan Gardens.
Posted by Allison Lynn at 10:22 PM No comments:

Every church really IS a small town...

Tonight, we sang our 3rd annual Gospel & Christmas concert at St. Barnabas Church in Peterborough. As we arrived at the church, I couldn't help but remember the snow and bitter cold that greeted us on last year's visit! 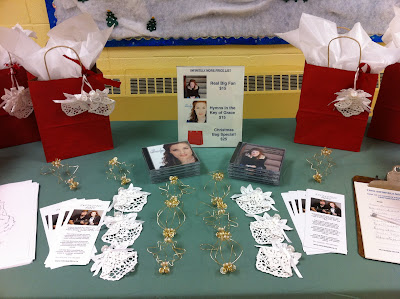 Our Christmas product table, featuring ornaments made by moi!
Early in the evening, we sang Gerald's song, "Every Church is a Small Town." As we were singing the first verse, a family arrived, late for the concert. They made their way to the front and began helping their elderly mother from her wheelchair into the pew.

As all this unfolded, the audience stopped listening to the song, and turned their attention to the family. Some gave them a welcoming smile. Others had a look of concern over the mother's failing health. Others left their seat to help the mother find her way into the pew.

"Oh no," I thought, "No one is going to hear Gerald's song!"
And then I realized, "Oh my goodness,
we're watching Gerald's song!"
It was amazing! Here we were, singing this message about every church being as loving, caring, and giving as a small town, and right before our eyes, we were seeing that message in action.

I shared my thoughts with Gerald on the drive home.
He said, "You know, I had the exact same thought process."
How beautiful and rare when Life imitates Art...