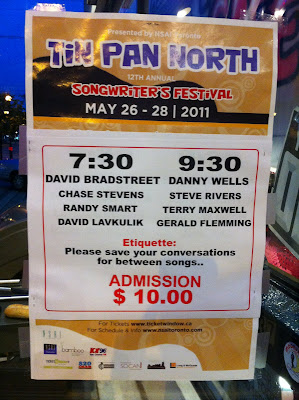 Tonight brought us to The Moonshine Cafe for the always fantastic Tin Pan North Songwriter's Festival. Gerald was scheduled for a great round with Steve Rivers (who's recording an album in Nashville), Terry Maxwell (who we played with at Winterfolk 2010), and Nashville songwriter, Danny Wells. Danny has had lots of hits, and fans of American Idol heard his song "Check Yes or No" on the final night of competition.

Every time I hear a round, I remember how much I love this stuff! Hearing writers sing their own songs in an environment as cozy as the Moonshine is such a fantastic way to spend an evening. Tonight's round was no exception. Everyone was so talented, each with their own style. As Danny sang each of his hits, fans in the audience sang along.

Gerald was awesome (I'm biased, but it's true). He did some of the songs we've demoed, like "When Saturday Morning Was All Day Long" and "Watertower" and even debuted a new song, "Neon Angels." He brought me up for the final song, and I added harmonies to "Every Church is a Small Town." People loved the songs, which is always so satisfying. 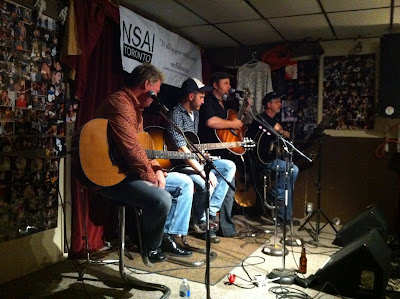