Book Review: When The Day Comes, by Gabrielle Meyer 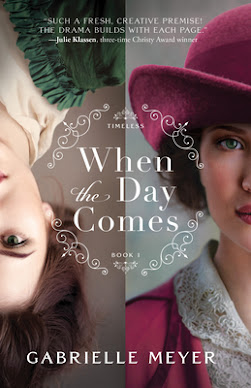 This is going to be a different kind of review for me.
I've got a bit of a hot take on this book,
and I've genuinely struggled with how to write this.
Okay, here we go...
When The Day Comes by Gabrielle Meyer
is a fun blend of historical fiction, romance,
and time travel science fiction.

Libby is a "time crosser." She was born on the same day in two completely separate locations and eras. From birth til her 21st birthday, she exists in both 1774 Colonial Williamsburg and 1914 Gilded Age New York City. When she falls asleep in one life, she wakes up in the other without any time passing. When she reaches 21, she can choose one path for the rest of her life, but choosing one means forfeiting the other path forever.

There is so much that I love about this book! The story is so creative, and Libby is a wonderful heroine and guide to the novel's unique world. I loved all the characters, settings, and relationships.

I haven't read much about Colonial Williamsburg, so that was a really fun journey. That said, I know a fair bit about the Gilded Age New York, and that felt both familiar and exciting.

The storyline kept me guessing with some really smart twists, and the ending was beautifully written.

But here's my struggle, and full warning: SPOILERS AHEAD!!!

Seriously - if you haven't read the book - STOP NOW!!!

I would love to wholeheartedly recommend this book, save for one important matter. In her Gilded Age life, Libby is forced into an arranged marriage (not uncommon for the era and her status). Libby is raped not once, but twice by her new husband. They have no incidents of consensual intercourse in their marriage. The second rape results in a pregnancy.

I'm not offended by the subject of marital rape in a novel. What offends me is how it's handled.

In the historical context, marital rape was legal. In the novel, her husband blames his "bad behaviour" on drunkenness, which historically, would also have been accepted as an excuse.

I always want my historical fiction to be in a proper historical context, but here's where I struggled:

First, as her husband writes her "kind" letters, we see Libby second-guessing her own feelings about the rape and her future with this man. At one point, she actually asks "Reggie's letter made me wonder if he would be a good father. Could we find a way to move part the tragic way our marriage started?" Again, she's asking this about her two-time rapist. In other sections, Scripture is used in a disturbing way to justify her choices.

Second, it's hard to stomach this thinking within the context of the novel because of Libby's mom. Also a time crosser, she spent the first part of her life living in 1990's America. This shapes her as a parent, and there are many references to Libby being raised with modern, feminist values. Why on earth would she never say to her daughter, "This is wrong. In the future, it'll be illegal, but you can still make different choices now."

I've read several discussions about this book online.
Some people don't seemed phased by the rapes or Libby's reaction.
Others hated the plot choice entirely.

I guess the good thing is that it's encouraging dialogue about a difficult topic,
and that's the sign of good art.

But because of the way it's handled, I just can't recommend the book.

Book has been provided courtesy of Baker Publishing Group and Graf-Martin Communications, Inc.