Singing for a Car Rally?

Okay, we might be alone here, but until recently, we had no idea what a car rally was or why we would be singing at one.

When our home church announced that they'd like to have a car rally, I imagined a drag race, starting at the church yard, whipping up over the 401, and ending with a front page story of how our parishioners elicited a record number of traffic tickets on a Saturday night.

Turns out, it's less dramatic, but much more fun.

For the uninitiated, a car rally is like a scavenger hunt, where teams collect answers to riddles by driving a pre-planned route and answering trivia questions about certain locations.

Despite the wicked rain, a good crowd gathered for yesterday's rally, and at the end of the drive, we were part of the celebration that included music, pizza, and prizes. 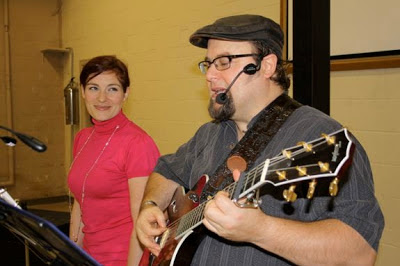 Hoping to have more photos by the end of the week. When we added "unconventional and unexpected venues" to our About page, we really didn't know where it would lead us.

Next time, maybe we'll sing right from our car!
Posted by Allison Lynn at 1:08 PM