The Sound of Music on Oprah!

I was glued to my tv this evening as I watched the cast of "The Sound of Music" reunite to celebrate the 45th anniversary of the landmark film.

As I watched it, I was flooded with memories of watching the film, singing the songs, reading Maria Von Trapp's autobiography that started it all...

I'm such a fan, and I could write for days about my love of the film and its music, but let me share these two wonderful memories that rose to the top today:

For our first date, Gerald took me to Stratford to see Christopher Plummer in "King Lear." Later, when we drove by the theatre, we saw a limo pull up, and out stepped Julie Andrews! Long story short (and if you ever want to hear this story in person, this is my favourite story to tell in play-by-play detail!), I stalked her in the gift shop until I got up the nerve to speak to her! I thanked her for how much her music had influenced me, she graciously said "Thank you, thank you very much," and I walked away with tears streaming down my face.

A few years later, I was cast in Disney's "The Pacifier" in the role of Maria. (The film contains a rather over-the-top rendition of the musical.) I spent 2 days in a high end studio singing Maria's songs, 10 days in rehearsal with award winning directors, and 4 days on set, singing and dancing out scenes from the musical. Most of our work ended up on the cutting room floor, but it was truly a wonderful experience.


To celebrate today's memories, here's a photo from the set of "The Pacifier":

"The Lonely Goatherd"
This scene was hilarious, but ended up on the cutting room floor.
And yes, that's a wig! 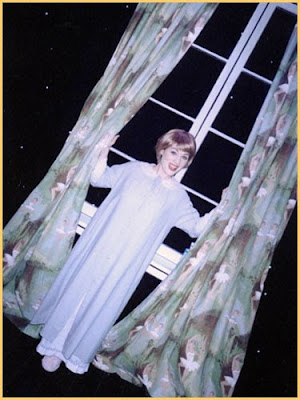