This morning we sang at the Salvation Army Church in Peterview, NL. After our concert on Friday, the church's music director invited us to perform a concert the next time we come through Newfoundland. Well, we really don't know if we'll be back this way again next year, so we offered to sing a few songs on Sunday morning. You never know what happens when you say "Yes" to something ...

The morning's service was fantastic! It's the 101st anniversary of this particular corps (congregation), so they had a wonderful guest speaker and a full house. The brass band lead the boisterous and joyful singing, and the junior praise team (featuring my young cousin!) stole the show. We sang Just a Closer Walk, Amazing Grace (My Chains Are Gone,) and to honour the anniversary, Every Church is a Small Town.

This afternoon, we got the upsetting news that our Wednesday concert in Indian Bay was cancelled. We'd had a great time there last year, and the news was really disappointing. But saying "Yes" was still in our heads. Gerald said, "Maybe the Salvation Army would like a concert that night?" So when we returned to the church, we asked, and they said "Yes!"


So, we'll be singing a free concert at the
Peterview Salvation Army Church,
this Wednesday, 7:00pm.
Come if you're in the area!

Back to tonight: the evening service was epic! More singing from the congregation and the junior praise team, and another fantastic message. We sang How Great Thou Art and Give Me Jesus. In celebration of the anniversary, the floor was opened for testimonies, and the stories began to flow. I could listen to testimonies all night long! The heartfelt messages of God's faithfulness were moving and inspiring. Some people chose to tell their stories through song, shouting out song titles to sing, or simply reading the lyrics aloud.

After the service, we enjoyed the anniversary reception. Nobody can put out a spread like church folk! 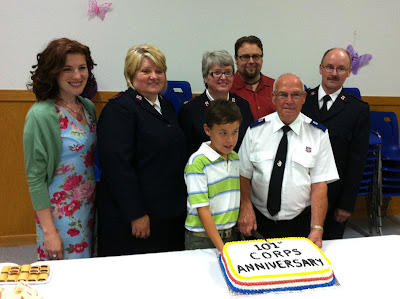 Cutting the anniversary cake with the oldest & youngest soldiers in the corps.
Posted by Allison Lynn at 11:50 PM