We're very sorry to announce that we will be canceling our Music in the Garden - Infinitely More Launch Concert this Saturday.

Since last week, we have been plagued by illness - colds, bad sinuses, and a terrible flu. If we were doing a concert at a church or other venue, we would make it work. But hosting a concert in your own backyard requires an enormous amount of work, and with all this sickness, we just haven't had time to prepare music, the backyard, or ourselves.

Our deepest apologies for any inconvenience this cancellation may cause!

That said, Infinitely More is still moving forward! This month, we will launch our new website with an Online Site Party! We're appearing at several churches over the next few months, and we're already taking bookings for Christmas services, parties, and other events.

Also, we're planning a Fireside Concert for the winter!

To follow all our events, please check in regularly with us on Allison's site, this blog, and Facebook.

Thank you for all your prayers and support for this event, and for our music! Please feel free to contact us with any questions!

Lisa Mowry, our amazing demo singer (and friend), has posted the demo for Gerald's song "Fifteen Minutes of Shame" on her website!

Lisa recorded the song while we were in Nashville last month, and on her site, she called Gerald "one of my very favourite songwriters"!

Visit her site to hear "Fifteen Minutes of Shame", and turn up your speakers - the song will begin automatically:

http://lisamowrymusic.com/
Posted by Allison Lynn at 6:38 PM No comments:

Actually, it was a double St. John's day!

This morning, we played at St. John's West for a service of Baptism and Holy Communion. A wonderful couple in the church just adopted a baby girl from Vietnam. I find baptisms emotional any time, but this one was especially beautiful. The family chose the hymns, and they reflected the love and support they want for their child's life in Christ.

In the late afternoon/early evening, we joined the worship team to play for the Gathering at St. John's York Mills. We sang great songs like "Indescribable" and "Your Grace is Enough." Rehearsal went really well, but when we got into the service, something else took over. I'd like to think it was us, but I know it wasn't.

When those moments hit, how can you not believe in something greater than yourself?

Posted by Allison Lynn at 11:27 PM No comments:

A few months ago, our bishop thought it would be a great idea to connect clergy and church musicians for a time of sharing, debating, and, hopefully, learning.

Today, ministers and musicians from the York-Scarborough Anglican diocese gathered for panels, discussions, and a little music making.

Many large issues came up:
Overall, the day was really good and, I think, crucial, to what we're all trying to do. Clergy generally have some way to connect with other clergy through regular pastoral gatherings, but church musicians tend to get isolated. With our touring ministry, I tend to forget how lucky Gerald and I are to meet and play with so many different church musicians.

My one disappointment in the day was the lack of contemporary praise and worship music. The Anglican church in Toronto has started to embrace a wide variety of musical styles - classical, world, African, jazz, Gospel, Celtic, etc. But praise and worship music is taking the world by storm, and it's a critical part of worship at our church. I know it's not everyone's cup of tea, but sometimes, we need to recognize that what's 'church' for us, may not be 'church' for other people.
Posted by Allison Lynn at 11:10 PM No comments:

So, I've been hinting at new things on this blog and on facebook, so here's the big news... (insert drum roll here!)....

Gerald and I are forming a duo!

We started singing together long before we ever started dating, and we've been performing together on a regular basis for several years. As of October 2nd, we'll now be operating as:

We're so excited about this new musical adventure! Infinitely More will mix new songs with fresh arrangements of classic Gospel songs. We want to serve churches of all denominations, and bring the Gospel into unexpected and unconventional venues.

We're inspired by Esphesians 3:20 which states,"Glory belongs to God, whose power is at work in us. By this power he can do infinitely more than we can ask or imagine." (God's Word Translation)

And we're kicking it off with a concert!

Please join us on Saturday, October 2nd to celebrate this new endeavor!

Pastors and clergy, please contact me directly for a very special invitation. 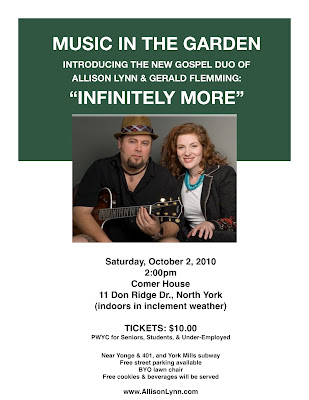 Posted by Allison Lynn at 3:27 PM No comments:

I've just learned how I can sync my blog with my site!

You can now read my blog at this address, or by visiting my site and clicking the Blog tab.

Yay! I'm so in love with Bandzoogle - not to do a commercial, but if you're interested in designing your own site, I completely and utterly recommend Bandzoogle. Contact me with any questions or for a free 60-day trial link. (Couldn't avoid it - that does sound like a commercial! I should get paid for this...)
Posted by Allison Lynn at 4:11 PM 1 comment:

The Quran, The Pastor, and My Choice


"I love Jesus, but sometimes, Christians drive me nuts."

I wrote it just after Gerald told me about the pastor in Florida who wants to mark the 9th anniversary of 9/11 by burning Qurans.

I started writing a blog post just after that, and I've been working on it for days. At first, I ranted and raved. I thought, "I'll show them! I have freedom of speech too!"

Every time I'd have a conversation about this pastor and what he's doing, someone would bring up the classic question, "What would Jesus do?"

And that got me thinking: "What if I turned this question not just on the church in Florida, but also on myself?"

Wow. That changes everything.

In "The Seven Habits of Highly Effective People," Stephen Covey shows that after any incident, we as humans have a moment where we can decide to either react or act.

Last night, as I continued to edit my blog post, I realized that I was reacting.

What if Jesus was asking me to act instead?

So, that's what I've decided to do. I'm still mad, and horrified, and generally upset over the situation in Florida, but that anger is affecting no one but myself (and possibly my patient husband who gets to witness my rants.)


Instead, here's how I'm choosing to act over the next few days:

- READ - I've just finished reading "Three Cups of Tea," which is a real-life example of how education can bring peace and healing. I highly, highly recommend you read it too!

- LEARN - We are all a little too ignorant about the different racial and religious groups that live in our own towns and cities. How can we ever love our neighbours when we don't know anything about them? This week, I'm going to take time to learn a little more about the Islamic community in my city.

- LOVE - If we do nothing more than love someone this week, imagine the difference that could make in our world. This week, I'm going to find a moment when I'd usually be tempted into gossip or sarcasm, and try to react in love.

- ENCOURAGE - I'm going to encourage you to choose action over reaction this week. I encourage you to be loving to those who are different than you, and to pray for peace and generosity in our world.


What is Jesus asking you to do this week?
Posted by Allison Lynn at 10:04 AM No comments: