From Mom and Dad's front window, you can look down a street that stretches out for several blocks before ending in a cul-de-sac. Usually, you can see to the end of the street. Today, you can hardly see past the first house.

Yes, our first gig for today has been canceled due to 'snowmageddon' - the term coined by our weather broadcasters for this storm. Toronto is scheduled to get 20 cm of snow today. Our particular area is going to get a minimum of 30 cm, plus wind squalls, zero visibility, and a wind chill of at least -10 C.

We were up bright and early to get ready for the gig, so we've now named it Christmas Movie Day. We'll give tonight's gig a call later on to see what they're thinking. Hopefully, both events can be rescheduled for next week.

In the meantime, I wanted to share this awesome photo from the St. John's West Christmas pageant. You may recognize the 'carolers' in the lower right hand corner.... 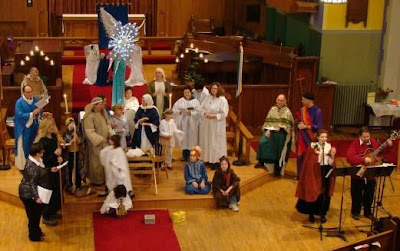 Okay, Gerald is NOT in a Victorian costume. I think that should be taken care of IMMEDIATELY!! :)