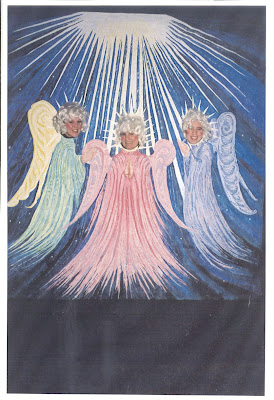 When my Dad, Rev. Hollis Hiscock, first arrived as rector of St. John's York Mills Church in Toronto, he looked around the large churchyard and had a vision. He imagined a dramatic rendition of the first Christmas story with actors on various stages sharing scenes from the story, and an audience traveling the path like pilgrims.

I was honoured to be invited into this creative dream, and for 10 years "The Real Christmas Story" was produced outdoors every December, thanks to a team of over 100 actors, singers, set-builders, tour guides, and other volunteers. We even shot a documentary that aired nationally on Vision Television for several years.

Our creative set designer, the late great Warren Hughes, designed a separate stage for each scene of the play, inspired by the colourful images of children's storybooks. For the angels, he said,
"I want a bright vibrant painting of angels on a starry night. I'll leave spaces for the actors faces. They'll be dressed warmly behind the set, but we'll just see their bright happy faces, their cheerful voices, and their Marilyn Monroe wigs for angel hair!"
The angel scene became an audience favourite, with many children returning to watch it twice. This photo brings back great memories for me. I loved my role in the creation of "The Real Christmas Story," and I love that we were able to share the Gospel in this creative, community-centred way for so many years.

Over 5,000 people 'walked' through THE REAL CHRISTMAS STORY on the cold December nights over the 10 years of production; each year the REAL CHRISTMAS STORY was performed some 40 times in a three hour time frame (approximately 400 individual stagings - a good run for any theatrical show); another 100,000 watched it on television and over 1,000 copies of the video were purchased. Magnificent! HH

It was a pretty awesome experience! I also love that it included people of all ages, from the babies who played Jesus to the seniors in our acting cast - a full community experience!