Today we feature a guest post by my husband and partner in all things Infinitely More, Gerald Flemming. Gerald is an accomplished and passionate songwriter, and I've asked him to join Worship Wednesdays to share his knowledge and insight into writing Gospel-inspired songs. Here's the story behind this year's Easter creation, There's A Light At The End Of The Tomb....


I’ve always been an enormous fan of setting myself challenges that require public responsibility.  This spring I had set it on myself to write a song for the Easter morning service.  A song that would represent where the Church was and something that was specific and profound enough to be worth the time on that blessed morning.

The first step is finding something that has enough power and grandeur to even be considered worthy.  If anybody knows me they know first and foremost I seek a great idea through whatever means necessary.  There are consultation moments and prayer moments and as in this case, being at the right place at the right time moments.

The Church was seeking a photograph that could be used to advertise for the Easter services.  Catherine, our church administrator, brought in some really beautiful and vibrant images.  There were crosses on the hill at sunset, and a shot of a solo cross at sunrise.   However there was one in particular that spoke to me the moment I saw it.  It was a photo of stone steps ascending towards an entrance way that was illuminated.  It hit me almost instantaneously… 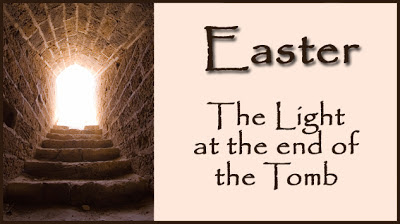 The image that inspired the words...

Substituting the word "tomb," in the oft used phrase, for the word "tunnel" gave it a deep feeling of possibility…the sense that after the darkest of times that there is an ending and a mercy and grace in this life and the next.  The idea was immediately embraced by the Church leadership to spearhead the campaign for Easter, and in my head I knew I had my idea for the song.

When I first approached the writing of it, it was obvious it was going to be a retelling of the story.  But how do you draw them into a story they’ve heard a thousand times?


‘The darkest night in the history of the world,
They lay his broken body in the cold, cold ground…’

By calling it "the darkest night in the history of the world" you immediately lend it the kind of gravity that is undeniable.  It immediately engages the listener because you’ve started the song at a defining moment.  In this case, a moment that is an epoch of the Christian faith.

The chorus of the song came very quickly...

There’s some tricky internal rhyme in there as well as using the plosive nature of some of the consonants to create a dynamic rhythm.

As often happens, Allison came in and heard the pieces of the song in their formative moments and wiggled her way into the process.  And the song is infinitely better for it.  The second verse returns us to a place where Mary goes to the tomb to mourn and administer burial rites.  She, of course, is unaware of the miracle that just happened.  This was the perfect and necessary choice for the second verse because you’ve already revealed the miracle in the first chorus.  How do you get people to re-engage with the resurrection?  By actually showing the moment of discovery as a beautiful and intimate encounter with Mary, the angel and Christ.


‘The breaking light reveals Mary’s tears,
With spices in her hand to anoint the master’s head…’

The chorus is referential and hyperbolic whereas the second verse is poetic and anecdotal.  And Allison wrote a beautiful verse for the song…thanks, honey.

The rest of the song was very simple.  As the music swept us away into Hallelujah’s, a key change chorus and then a tagged ending.  All the trappings of an uplifting song laid out for the congregation to hear.  And then they blessed us with applause.  Anglican applause is a very rare and valuable commodity and I will treasure that sound and that moment forever.


There’s no question in our hearts that
‘There’s a Light at the End of the Tomb’ will be on our next CD.
This will be coming, God willing, in 2014.
Peace…Gerald

Worship Wednesdays is a weekly series to encourage and equip worship leaders and songwriters. Bookmark this page & visit us every Wednesday!